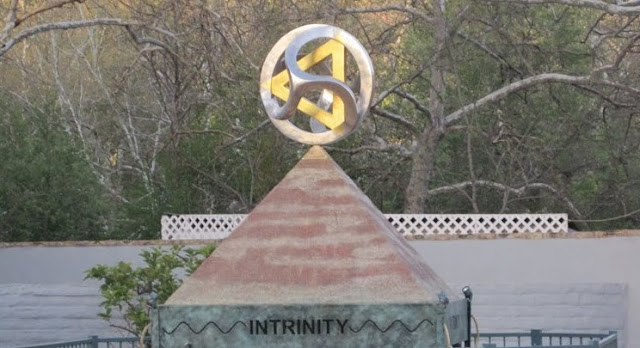 I've been interested in sacred geometry ever since helping a friend build a geodesic dome house in , some years back.  Partially because of the structure, and partly because my friend loaned me his copy of The Ancient Secret of the Flower of Life by Drunvalo Melchizedek.  Having never been much of a math student, I was surprised that the world of sacred geometry spoke so clearly to me, and have benefited from the conversation ever since.

Last year about this time, my eye was drawn to a sterling silver Flower of Life pendant featured on the Mayan Majix website: http://mayanmajix.com/index.html.  Inspired by the detail and craftsmanship; I purchased one of these pendants, from Frederick Shute Designs, in Arizona USA.  More recently, the above named co-conspirators featured a most elegant looking Galactic Butterfly ring in sterling silver which demanded my attention due to my strong affinity to that famous Hunab Ku symbol. 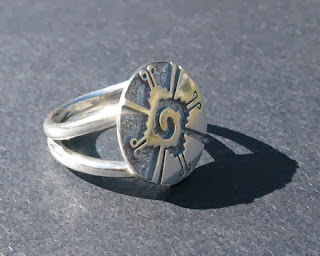 I normally do not wear jewelry much, although I have acquired a few rings here & there over the years.  All that changed very subtly in 2012, as first I was drawn to the flower of Life disc, then just a month or so later, synchronicity put me before a jeweler at a flea market, selling a single silver Mayan calendar ring I was unable to walk away from.

So, when I came upon this Galactic Butterfly ring, a sense of balance suggested by the one unadorned hand made it logical that I needed to have one.  When I placed my order, Fred asked if I'd send him a photo of myself, as he finds it helps him craft a piece in tune with that particular person's energy.  I like that.  It isn't every lapidary artist who will go that extra bit, even on custom pieces.

When the ring arrived, I soon discovered it had not traveled alone; as there was a second metal object wrapped up separately from the ring.  Curious, I unwrapped it to find in my palm a most unique piece of sacred geometry; the likes of which I have never encountered previous.  I was holding what seemed to be a 3D Star Tetrahedron:  A triangle in a circle, guarded on each side by a triskelion; formed as a sphere, absorbing no doubt, the energy of my curiosity.  The accompanying note explained that this Intrinity was a gift from Fred.

Having once or twice seen them featured on the Mayan Majix website I knew these were another of Fred's creations, but not much else.  The immediate symmetry of 3.3.3 jumped out at me, as well as something else I couldn't quite put my finger on ... like looking at only a part of a puzzle or something.  Intrigued, I began rolling the thing about in my hands as I gazed upon it.  I could almost feel the cellular encodements bursting somewhere in my brain - or maybe it was in the heart chakra, hard to say sometimes.

Before long, rolling the thing over in my hands evolved into placing it on my desk and giving it a good spin, like one might a silver dollar.  The fluid motion of the 3D object immediately filled in the aforementioned missing piece, as my eye made out the unmistakable image of the Merkaba within the spinning Intrinity.  Watching this silver orb spinning in front of me on the desk, I became aware of gentle movement in the subtle energy field of my aura.  Impressive!  It's not just any do-dad that will have that effect.  Being thus convinced there is more to this Intrinity than meets the eye, my eye went online, in search of more information about this intriguing object.  Right down to the Fibonacci sequence, it's all there in this little powerhouse of sacred geometry. 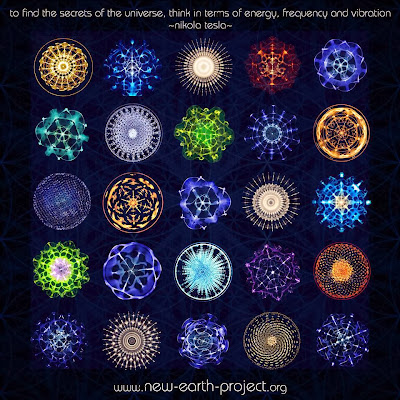 I also wrote to Fred, inquiring further about the Intrinity, and how it came to be.  He told me of the great Epiphany that "Everything is connected by a system of ethereal geometry;"  and of learning a lot from Father Charlie Moore's "Arc of the Covenant" lecture at Findhorne.  Fred insists that the design of the Intrinity isn't his, but that it just 'popped out', after some marathon study sessions with The Emerald Tablets of Thoth material.  It has been my experience that more often than not, critical information comes to us, and through us in just such a way: if not in our music or art, then sometimes dreams, or excursions into altered realities.

Teaming with Ed Reilly of Bronzesmith Foundry, the Intrinity became  incarnate as a monumental 3D kinetic sculpture, located at 321 Rt. 179 in Sedona, Arizona, out in front of the Healing Sound Center.  It rotates through seven cycles of increasing velocity - through the seven chakra levels; culminating in the opening of the merkaba portal.  The Intrinity is accompanied by the amazing chakra healing tones of Jonathan Goldman, as the associated chakra colors are displayed.  The Intrinity is also available as sterling silver jewelry in three sizes.  More than physical objects, these are alchemical tools, which can also be charged very nicely in the presence of the Intrinity sculpture.


More information is available at:
http://www.metaphysicalsculpture.com/. 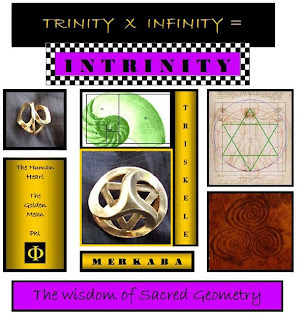 I also discovered a very nice Intrinity chakra balancing video on the YouTube (see below)
as well as some related information.  Not being one who generally leaves a good thing alone...or being satisfied with less than personal experience, I decided to try spinning my new Intrinity while playing a few minutes of Schumann Resonance Isochronic Tones.  The same flourish of energy moving thru my aura was again present, just stronger, and more evident now.  I gotta say it's rather nice getting the chakras and brainwaves calibrated at the same time.  Since my previous mention of the Schumann Resonance CD in a recent post, there has been some interest in it, so I present it here again for convenience sake. 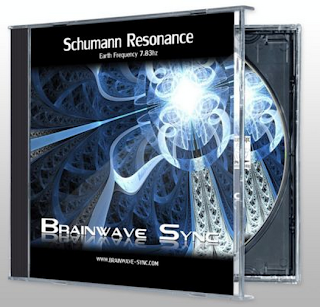 After experiencing the Intrinity chakra balancing video a few times, and being basically too lazy to spin my new alchemical tool for 20 minutes, I wondered if anyone was making a table top size version of the Intrinity kinetic sculpture.  The bad news is, none are currently available: the good news, is that it's in the works! (No word as to when)  So, if you are interested, stay tuned to this blog, and don't lose the links included here.

Being a higher end function of the light body, and a vehicle for ascending to higher levels of consciousness; the Merkaba has been written and speculated about for a very long time.  When looking at the root word origin of merkaba, we get a sense it's true meaning.  The Torah has two definitions of the word.  The first is chariot and the second is throne of God.  Seems straightforward enough for me. As with most things these days there are many thoughts and beliefs surrounding the subject of the merkaba and ascension.  As with spirituality in general, ascension is an intensely personal effort to become all we are, and to overcome the limitations of this dimensional reality.  It isn't something that happens to you as a reward for believing a certain way, or thing.  It isn't a place you get transported to; it's a transformation which happens within us.  We do not ready ourselves for ascension by reading and learning more than someone else, or by purchasing expensive study courses to puff up our fragile egos. We prepare for ascension by working on ourselves; busting those fragile & tyrannical egos so we can then fine tune the personality, and the entire energy system.  Certainly, the acquisition of knowledge is a key part in this ascension process, but nobody can do the homework for you...because it's the work we must do to get back home.  That is what ascension is all about. 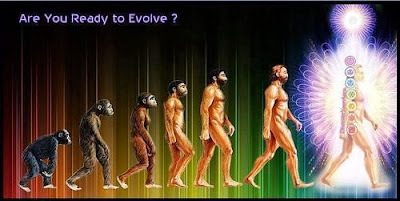 I suppose it should be stated that the only thing I receive from the endorsements I make, is the satisfaction that perhaps others will find these things helpful, as I have.  It just makes all kinds of sense to me that in a world which daily assaults our balance & sensibilities, that we should endeavor to restore said balance every way available to us, until we can learn to just do it ourselves naturally.  Think of these things as alchemical training wheels.  Once we know how to go with the flow, without crashing...we won't need them anymore; but these days, every little thing helps a lot; and the Intrinity is an energy tool based on sacred geometry which you can carry around in your pocket or wear around your neck. 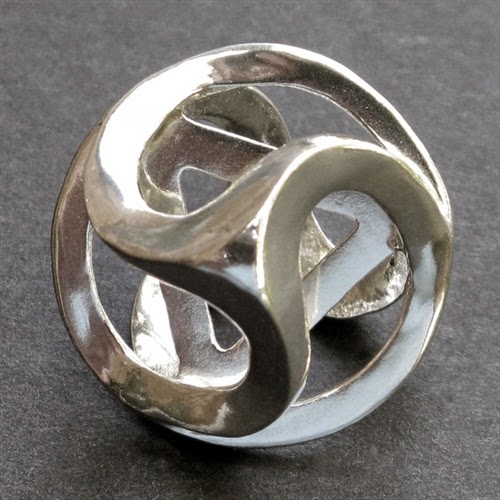 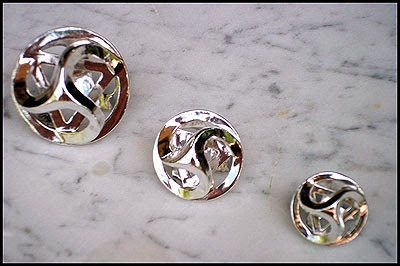 The Mayans, Merkaba and 5D
Your Aura & 12 Chakras: Keys to the Kingdom

Reincarnation, Karma & Destiny
Breaking Free from Ego
Evolution or Extinction
Ascension Crystals
Hunab-Ku, Deja-Vu & the Walking Dead
Quest of the Spiritual Warrior
Creeping Blindness at the 5D Portal
Soul Searching at the End of Time
Dancing with the Elephant in the Room
Gotterdammerung 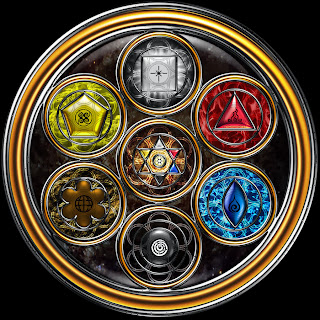 Posted by Chautauqua at 9:58 AM