Racial intolerance remains perhaps the single largest obstacle ever to human evolution.  This isn't because we are incapable of overcoming it, but rather because we are not permitted to overcome it.  Racism and related issues such as immigration & poverty are just too effective as tools to separate us and keep us at one another's throats; and as we all know, "if it ain't broke don't fix it."

Just spend an hour watching mixed ethnicity children at a day care and you will know that racial intolerance is not something we are born with, it's something we're conditioned into with rhetoric, propaganda and outright lies.

In the bloody wake of , Donald Trump has emerged as the second president of the confederacy and the new face of white supremacy.  Trump set the tone the very first day of his election campaign with his now famous remarks about Mexicans being "rapists, thieves and thugs."  That first hateful speech should have been his last, but he survived it, as he has every other wrong headed racist thing he's uttered on his surreal journey to 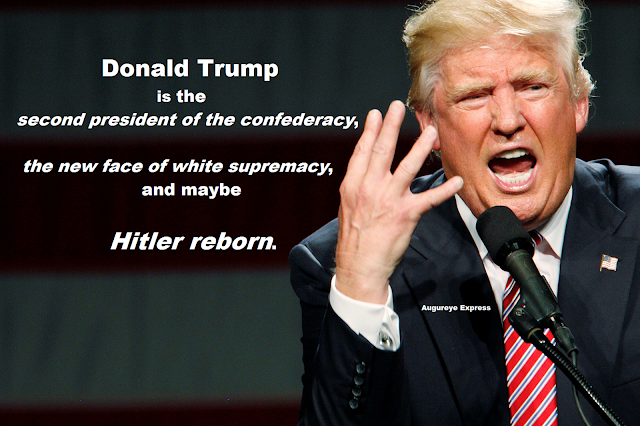 We were lulled into believing that racism was dying from starvation as humanity entered this new promising age of Aquarius, then along came Donald Trump serving up an endless feast of hate, becoming the hero of everyone who believes that the south will rise again.  Trump isn't making this country great again, he's setting the calendar back 60 years or so in an effort to make things like they used to be in one of this country's ugliest eras.

To better understand where Trump is taking us; we first must look at where he comes from, specifically his father; Frederick Christ Trump.  The real estate developer often claimed he was Swedish in an effort to conceal his German bloodlines.
In 1927 the New York Times reported that Fred Trump was arrested at a Ku Klux Klan rally, for fighting with the police.  Some years later he was also investigated by the justice department for racial policies at his housing developments. 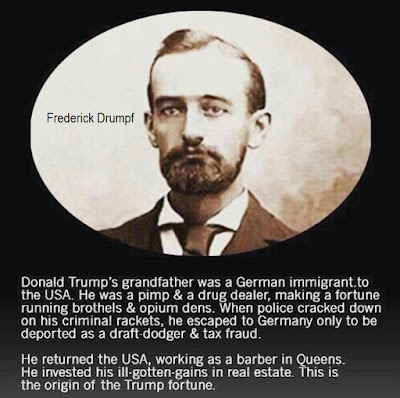 It is revealing to look into the beliefs and actions of Fred Trump because on several occasions Donald Trump has said his father was his hero and role model in life, so it figures he would adopt his fathers racial intolerance and other beliefs.  Looking farther into the Trump family tree we discover that Frederick Drumpf, Donald's grandfather was a German immigrant and by all accounts at the time; a pimp, and drug dealer, who made his fortune running brothels and opium dens.  This is where the Trump empire began, just for the record.  It helps to keep our perspective in the nervous now.  Trump family values.

Getting back to Trump's dad, turns out he was something of a weasel in more than physical appearance.  He was such an unabashed racist that the famous folk singer Woody Guthrie came to hate him, and expressed those feelings in many songs which may have been some of the first protest music.  While Woody wrote and sang many songs about Frederick Trump, the one history remembers the most was "Old Man Trump." 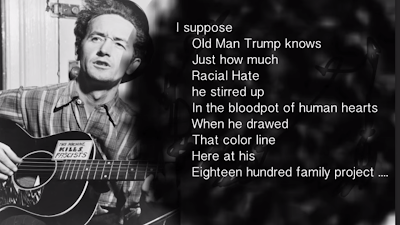 When Fred Trump built the Beach Haven apartments for returning WWII war veterans, he used some slimy tactics to legally get away with creating a "color line" - no blacks allowed.  He is infamous for creating civic anti-black housing codes that are still on the books today!  In 1954 Fred Trump was investigated for profiteering from public contracts for housing, and overestimating the charges for Beach Haven by almost 4 million dollars.

Yes indeed, it does seem that Trump's daddy is his role model in business matters, while in his personal life he models himself more after his gramps.  Donald Trump has no special business acumen at all; he just copies everything his daddy did, with money daddy gave him.  Proof once again that the slime always rises to the top.

Back in Woody Guthrie's time; protesting social injustice with music was about all they had to push back with.  There was no public radio or internet platform from which to engage and enrage the powerful elite, and over time, Woody included Trump's daddy in many of his protest songs.

Back in the 60's you could hear protest music any time of the day on your radio; but those days are forever gone now with "clear channel" canned music for the masses.  Most of you still don't realize that all of the newspapers and radio/TV stations in are owned by just six corporations.

Protest music takes a somewhat different form today, specifically the format of the YouTube video where anyone who wants can become a troubadour for truth, and rail against the social injustice & tyrants of today. This is why issues like Net Neutrality are so important, because they are the attempts by those six corporations to own & control content on the internet as well as news and television.  If they ever succeed in taking over the internet, it will be the end of free speech as we have known it. 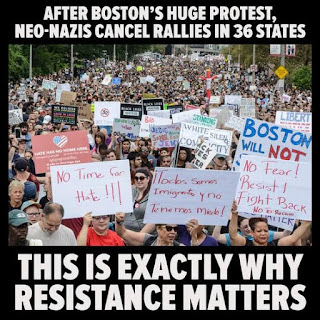 Of course protest music will not be enough to win the day all by itself.  Social injustice is such a cancerous monster nowadays we must literally take to the streets like folks did during the illegal, unjust Vietnam war, and shout it down where ever it rears it's ugly head and rebel flag.  Want proof?  How about the fact that after 's massive anti-Nazi rally neo-Nazis cancelled planned rallies in 36 states.  Like all cowards, the white supremacists don't like a fair fight or even odds.  They just want to drive their cars into crowds trying to kill as many as they can, and Donald Trump, is their kind of leader! 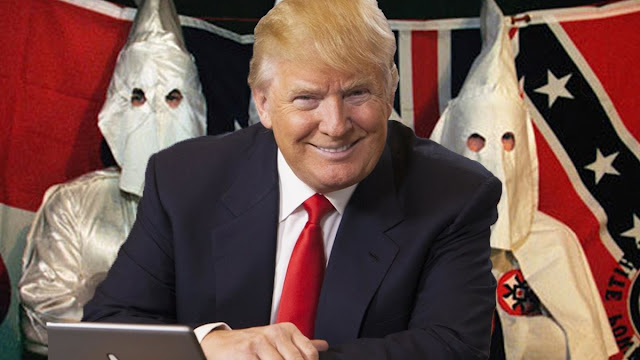 On the home front Trump is doing his absolute best to ignite the flames of a race war; while internationally he just cannot wait for the provocation that will permit him to nuke into the bronze age.  We can all just sit around watching to see what happens next; or we can stand up for ourselves and remove this deranged toddler from office before he creates damage we cannot walk away from.  What's your pleasure?

Our self-appointed leaders have been using racial intolerance and hatred to keep us divided and hateful for all of our lives, going back generations.  It never changes, they just keep driving those wedges into society to keep us at each other instead of going for the ones in control.  You'd think we would learn after a few generations and wise up; but alas we do not, and cannot so long as we permit bottom feeders with no education to lead the chant of hatred from the highest office in the land.

© 2017 full re-post with permission only


Inspired by Woody Guthrie's "Old Man Trump" I went searching for songs protesting
the old man's son, and found some.  Actually I found quite a few, and
I would be lazy & remiss if I didn't share the best results with you here. 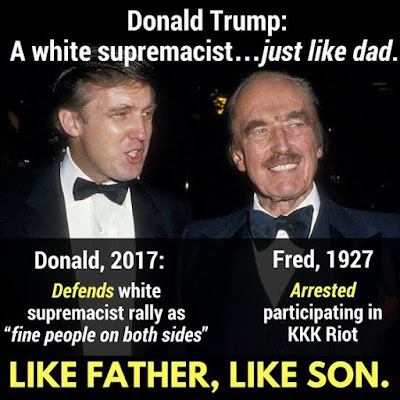 ~Related Augureye Posts~
Justice Denied
Crazytown
Above the Law
America has PTSD.
California Firestorm
How Trump is Uniting America
Trumps Meltdown
I Weep for the Future
Hijacking Aquarius
Requiem for America
Democracy Dies in Darkness
Madman in the White House
For What It's Worth
American Coup-D'etat
The Emperors Ego
Genocide Clown
Its Daylight in the Swamp
In-auguration-day
Here in Trumpland
Flag of Hatred
Little Victories in Dystopia
2016~one of those years
Don't Lay Down Your Light
Nothing Changes
Future Imperfect
The Moral Minority