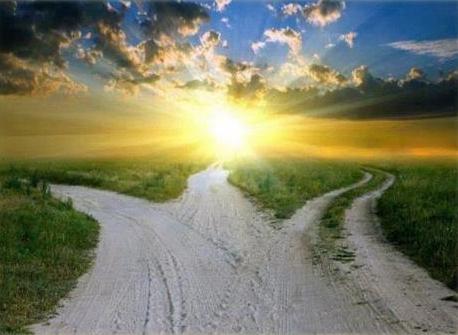 The Earth and all life upon it is a product of Resonance Vibration.  It is a Resonance Vibration that is increasing in dramatic fashion, as “The Great Shift of the Ages” unfolds around us.  We currently find ourselves in a state of accelerated growth & learning, which forces us to adapt on the fly as massive changes sweep into our lives, and across our planet.

We see the effects of this in the world around us.  Nations, politics, Institutions and traditions are all changing, Society is changing: and not always smoothly or peacefully.  We, as individuals, are also changing; on multiple levels…all at once it seems.  As we attempt to understand the changes in our lives, and the effects they are having upon us; the larger scale global changes serve to add a nebulous sense of doubt, confusion and urgency.

Everything is connected on the great medicine wheel of life. 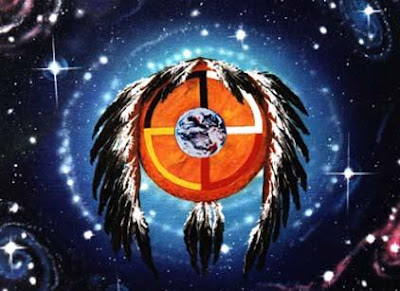 To better understand, and Exploit the energies sweeping into our lives at this time in history, it is necessary to understand exactly what is happening to the Planet.

Just what is this “Great shift of the Ages” all about?

Well, it’s all about opportunity and choice.  We now have the opportunity to manifest whatever we will into our lives, with our imaginations being our one true limitation.  We must now choose, as individuals, and as a species, to step beyond what has been, and to create what will be.

To better understand the stage upon which all this is being played out we must look first to the science of Astrology, which in basic form, is the study of cycles, and the relationships between the cosmic and individual cycles.  Astrology offers us both a history of humanity’s evolution, and a roadmap of where this evolution is taking us.

For this we look to what is known as The Great Year: the span of approximately 25, 935 years it takes the Planet Earth to travel through all of the constellations of the sidereal zodiac.  Since this represents the Sun’s passage through the zodiac (moving backwards) it is considered as the Great Year, where the Sun’s position in a constellation represents the Great Month, often referred to as an ‘Age’, lasting roughly 2,150 years.

Because the Earth is not a perfect sphere; and because of the Moons gravitational pull, it must make a wobbling motion to maintain its position in space.  Due to this effect, known as Precession, The Earth “looses” or regresses approximately 50 seconds of arc on its yearly sojourn through the zodiac

So, The Earth comes up short of its point of departure at the end of every 365 ¼ days.
Its point of return is actually almost one minute of arc earlier.    It is this constant regression of the interception point, or the Spring Equinox, which causes the changes in the Great Month, and the World Ages.

In natal astrology, the demarcation line between each sign is known as the cusp. That narrow zone where one sign ends and the next one begins; where the energies and attributes of the two signs blend and meld together.

The acceleration of The Quickening is but one indication that Earth is nearing the end of this transition period.  Common consensus, from Nostradamus to the Aztec, Anasazi, and Mayans holds that the transition into Aquarius will be complete and total in this current year, 2012.

We begin to see the true significance and impact of humanity’s evolutionary process when we realize that riding the cusp of the ages isn’t all that is going on right now. The Great Month of Aries, just before the now ending Great Month of Pisces, belonged to the previous Great Year!   With the onset of the Piscean Age, some 2,149 years ago, humanity began a whole new phase in its collective evolution!

So we see that we are not just transiting between two great months, but that they indeed are the first two ages of a new Great Year; The beginning of a new evolutionary cycle.

Still, there is something more going on which makes this a critical time for humanity.  There is yet another evolutionary cycle overlapping the Great shift of the Ages, and it too, is unfolding right now, at this very moment.  Simultaneously with the shift of the ages, the Earth is progressing out of Third dimensional density resonance vibration, and into Fourth dimension density resonance vibration.  What this means in a nutshell is that Earth’s resonance frequency is increasing to a less dense and more spiritual vibration in the space-time continuum.

It also means that recess is over.

Until now we’ve had the luxury of putting off those lessons we chose not to undertake, both as a species, and as individuals.  We have now arrived at the point where childhood ends and adolescence begins.  Just as the child eventually must outgrow childish ways and selfish preoccupation, humanity now must accept greater spiritual responsibility and discipline.  As third dimensional reality gives way to the ever-increasing emergence of fourth dimensional resonance vibration, we find ourselves at a crossroads in time.

We watch the world change around us, from what has been into what is becoming. In the past, major life lessons sauntered in every so often like lone vagabonds: Nowadays they are showing up regularly, in surly groups.  We feel an increasing restlessness that is nothing short of a spiritual imperative.  There is the sense that those things, people, and institutions that cannot or will not keep pace with the changes by adapting to the higher, more refined frequency vibration; just might not get to complete the journey! Think for a moment of the wondrous opportunity we have before us right now: To be able to shift from third; to fourth Dimensional Consciousness,   in the same lifetime!  This has never before happened in the history of humanity; and brings in the law of forced change; represented in the Tarot by the Tower Card. 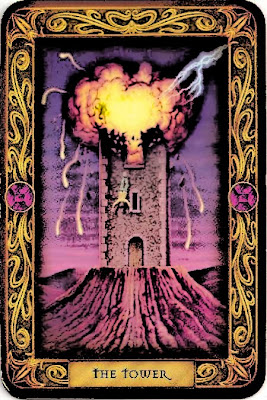 In the book of the Tarot, the 22 major arcana cards represent universal archetypes, which function as a kind of subconscious language for humanity.  The 16th card is the Tower, which symbolizes the spiritual law of purification.  It is nothing less than a revolutionary cleansing on all levels of our being.  It is the purging of our impurities and the burning up of our dark aspects…and it is exactly what so many are now doing, consciously or otherwise.  The imagery on the card shows a lightning struck burning tower, with a human figure jumping to earth from the top.  The symbolism whispers to us that we must choose to jump into fiery transmutation, rather than cling to the eroding walls of tradition.  What this means to us in our current reality is simple.  We must choose to evolve into fourth dimensional reality along with mother Earth, or else be phased out when the third dimensional paradigm matrix no longer exists to support us.

So, you may be wondering, just how does one go about this personal transformation?      Well, it’s simple really, and must begin with a brief review of some metaphysical precepts we have learned over the last 30 years or so.  The reason for this will become apparent when you realize that much of what most folks take for granted about their existence, is in fact, backwards. For instance: we’ve learned the Soul has a body, not the other way around and that body serves the mind, not vice versa. We’ve learned our waking world is just an illusion, but that our dreams are doorways to the real.  We’ve also learned that the reality we perceive is created by our thoughts and intent … and that we have the power to design our own destiny accordingly.   So, do not think it too awfully strange when I tell you that your auric field creates and maintains the physical human body, NOT vice versa! 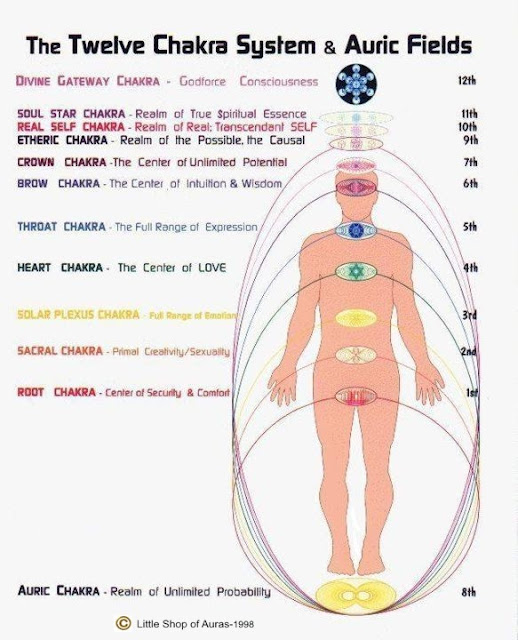 We are NOT human beings having a spiritual experience…
We are spiritual beings, having a human experience!
Everything is energy, and energy follows thought!

It is through our aura & 12-chakra centers, that we are able to exist on this planet, and to manifest our thoughts and choices into physical reality.  If our choice is then to raise our vibration to keep pace with the evolution of humanity, it must be through the accurate understanding and proper use of this human energy system.  Our aura and charka system is the very foundation upon which our spiritual and physical existence is built, and maintained.  Unfortunately it is also one of the least understood and most neglected aspects of our collective spiritual development.  To heal the physical we must first treat the etheric, because all disease and discordant frequency vibration begins first in the human energy system before it manifests in the physical.  Therefore when we embrace a spiritual practice which returns the aura & charkas to “manufacturers’ specifications” the physical body reflects such attunements as healing.  It has to, it has no choice, but you do!

As I said before, we’re living in a time of great opportunity.  Just one of the many benefits of the quickening is our enhanced ability to program and direct our thoughts into physical manifestation... even by accident!   A more troublesome effect of the quickening is that it greatly amplifies whatever our basic energy and tendencies are, making them much stronger and more pronounced.  This explains why such things as greed, violence, intolerance and negativity are doing such a land office business nowadays.

Humanity IS evolving. I believe that most of us now incarnated on the planet are each in our own way, a spiritual master. I simply cannot endorse the notion, that at such a critical point in our history on this planet, the God force would entrust the stewardship of Earth to any lesser group of beings...Too much is at stake. 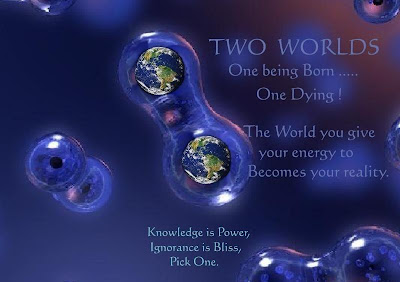 “We must dream the future,
because only the dreamers can change the dream.”

As the Piscean Age slowly withers away beneath the ever brighter rays of the Aquarian dawn, we are at the crossroads of time, on the cusp of all things new…with the knowledge and tools to create all we might imagine.  If we can know courage amid the darkness and tolerance amid the ignorance; if we can teach Love in the face of hate and learn faith in the face of doubt…then, by example we can show the way, and help lead the tribe of man homeward.
*

Until Next time; Be good to each other 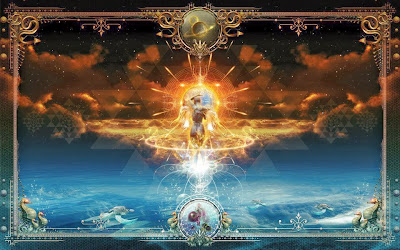 Posted by Chautauqua at 2:23 PM